It’s newspaper Correio da Manhã who features a story claiming there are two ‘mega projects’ which ‘seduce’ the coach to leave the Dragons this summer.

The clubs are Lazio and West Ham, who are promising a ‘millionaire investment’ in the next transfer market.

Correio da Manhã says the Hammers’ project is ‘more attractive’, as the club even reached the Champions League qualifying spots for a few fixtures this season, and plan to be in Europe’s most important competition very soon. 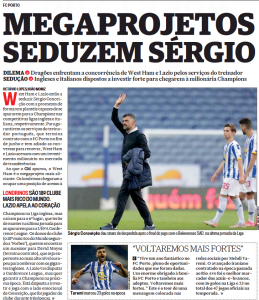 The London side are said to be looking for a manager who’s experienced ‘at the highest European level’ to go head to head with English giants.

He’d replace David Moyes, which feels unlikely at this stage, with the manager expected to sign a new contract.

Meanwhile, Lazio also have a project to play in the Champions League, and would use Conceição’s ’emotional’ side as he featured for the club for three years.

Correio da Manhã sound sure about what they say, having the news on their front page. So let’s wait and see how this story plays out in the Portuguese media in the coming days.