West Ham United’s desire to strengthen their attacking division midway through the season saw them linked with various strikers.

Among them was Gaëtan Laborde and Montpellier president Laurent Nicollin revealed in January the 27-year-old’s agent called him to relay the Hammers’ interest.

David Moyes’ side have been following the Ligue 1 striker in recent months.

That’s what L’Equipe are reporting today about the Frenchman, who has been in fine form for Montpellier this season, scoring 15 goals and registering eight assists in 35 league matches.

Laborde has scored more than 10 goals in the league for the second time in his career and this could be one of the reasons why he struggled to convince Didier Deschamps to include him in the France squad.

This could have an impact on Laborde’s chances of joining West Ham as L’Equipe explain the player could struggle to obtain a work permit as per the new rules implemented, post Brexit, at the start of this year. 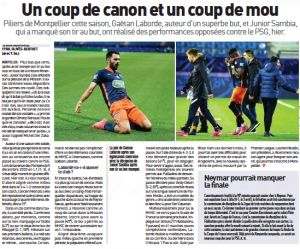 As per the report, the Montpellier chief met the attacker’s representative recently, and the agent will have discussed his client’s future.

For West Ham to sign Laborde, they must make sure the attacker can obtain a work permit.