For the past two days, reports coming out of Belgium explained the Hammers have tabled an offer for the midfielder. It was also suggested West Ham were the ‘wrong choice’ for the 28-year-old.

The Premier League side’s hopes of signing the playmaker was crushed on Friday after Club Brugge confirmed Vanaken and Simon Mignolet have signed new contracts, which will keep them at the club until 2025.

They explain the Jupiler Pro League winners made a statement by renewing the Belgium international’s contract, just after rejecting West Ham’s offer, which was in excess of €15m. The English club’s proposal did not convince them.

David Moyes viewed Vanaken as a ‘dream’ signing to bolster his side’s midfield, but both the ex-Everton manager and his employer suffered a blow in their pursuit of the Club Brugge star.

Even if the Hammers’ bid would have been accepted by the Belgian side, a move couldn’t have materialsed because the midfielder wasn’t keen on joining them. 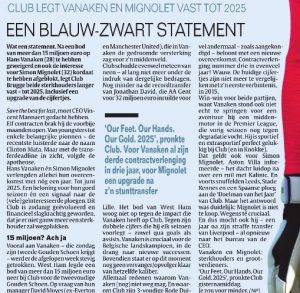 HLN claims the offer tabled by the Hammers did not ‘outweigh the impact’ Vanaken has at Club Brugge.

They also don’t have a replacement for him in the squad and it’s too late in the window to find a successor. HLN claims these among some of the reasons Club Brugge didn’t let Vanaken leave in this window.