The Premier League side allowed the 27-year-old to join FC Porto on a season-long loan deal last summer.

His struggles continued in Portugal and the winger has been restricted to limited playing time this season.

Earlier reports indicated the Brazilian would return to the London Stadium and West Ham would then place him at another club.

Two days ago, Portuguese newspaper Record reported the former Lazio man was set to get an unexpected second chance at Porto. This has now been further backed by A Bola in today’s newspaper.

It’s claimed the player’s departure from Porto has been ‘definitely put aside’ in the winter market because the two parties have decided the loan agreement is ‘to be respected until the end’, which is until the end of this season. 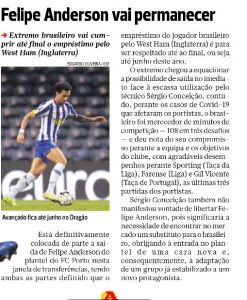 Anderson considered the possibility of immediately leaving the Primeira Liga side, but he was recently handed opportunities after a few of his current teammates tested positive for Covid-19.

In addition to this, Porto manager Sérgio Conceição wasn’t in favour of allowing the attacker to leave.