West Ham United could be interested in Everton’s Moise Kean this summer if Juventus put him up for sale as expected.

That’s according to Tuttosport, who say West Ham have made ‘enquiries’ about the Italian striker ahead of the summer transfer window.

The newspaper explains that Juventus are ‘trying to figure out’ whether Kean can be sold on for a ‘sufficient’ price should they redeem him a year early from Everton.

He’s currently on a two-year loan from Goodison Park, which the Italian giants will have to make permanent for €28m next summer if certain conditions are met.

Juventus, though, are toying with the idea of buying the player a year early and then moving him on, having decided he is not a firm part of their plans moving forwards.

They’ve tried to renegotiate the deal with Everton to no success, so instead need to see if there are any suitors willing to pay what they’d want and thus make buying Kean a year early ‘convenient’.’ 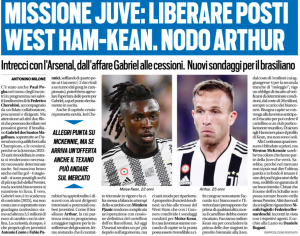 They need a ‘particularly generous’ club to stump up the cash to make a deal worthwhile, and West Ham could be it.

They’re on the hunt for a striker this summer to ease the burden on Michail Antonio, and they ‘certainly like’ Kean’s profile, even after his struggles during his sole year at Everton.

Whether they’re willing to pay Juve’s asking price isn’t mentioned, but they have ‘conducted’ enquiries about a possible move. They are, though, not the only club that like the forward.