Maximilian Arnold has experienced a year full of mixed emotions, having nearly got relegated from the Bundesliga with VfL Wolfsburg, and then winning Euro U21 with Germany.

The youngster is seen as one of the rising stars in Germany, which has brought interest from other clubs, including West Ham.

After Arnold’s arrival at Wolfsburg’s preseason training camp, Kicker magazine’s writer Thomas Hiete wrote in his column Arnold has been on the radar of Borussia Monchengladbach and Schalke for a long time, and there is interest from two English clubs, which includes West Ham United.

It’s not been reported if West Ham have made an approach for Arnold, and it may be a case they are just monitoring the youngster. However, West Ham will be boosted by recent comments made by the German when quizzed about his future. 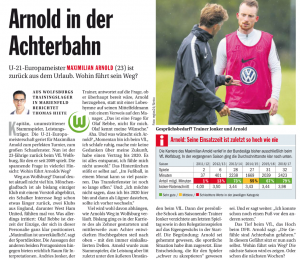 Speaking last weekend Arnold said in an interview with MDR: “I cannot say I will stay in Wolfsburg until 2020. In football, a lot of things can happen in one month. The transfer window will be opened for so long time. I don’t want to say that I will be here until 2020 and then to look a liar if I’m transferred sooner.”

It would be an ambitious move for West Ham to bring Arnold to England, given his standing in Germany. Should Arnold leave Wolfsburg its’s likelier he would stay in his home country at this stage of the career, rather than move abroad.