Felipe Anderson to West Ham continues to rumble on in Italy, as little progress appears to have been made over the weekend, but that doesn’t mean it’s dead in the water. Far from it.

According to Il Tempo in Italy, this week could be the one where everything falls into place, as the Italian newspaper reveals discussions are still ‘frenetically’ ongoing between the two clubs in hope of finding a deal.

This weekend saw an article in Corriere dello Sport reveal a ‘blitz’ was coming from West Ham for the Brazilian, so this update ties in nicely.

The Hammers were said to have offered around €27m for Anderson, but Il Tempo now expect that to be increased this week to around €30m in total, which is still some way off Lazio’s valuation of minimum €40-45m. 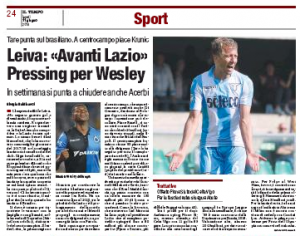 With the Lazio forward free of any World Cup hindrance, this can carry on at a steady pace for the next month or so if needs be, although the Serie A side will want to get it done sooner rather than later in order to get replacements in ahead of preseason.

At no point has there been mention of this being called off anytime soon, so for now, optimism remains a deal can be done down the line.