Spending a year on loan at Inter during the 2009-10 season from FC Twente, Marko Arnautović discovered Italian football for the first time, returning 11 years later when Bologna came knocking to bring him back from China, where he had been for two years with Shanghai SIPG.

Before that, however, between 2013 and 2019, the Austrian striker spent time in England, first with Stoke City before heading to West Ham in a £20m transfer.

Despite leaving in a rather controversial deal to Shanghai two years later, Arnautovic is still well loved at London Stadium, where he managed to score 22 goals in 65 games for the Hammers, as well as picking up 12 assists.

Now the star of the show at Bologna, the 32-year-old was interviewed by Gazzetta dello Sport, where he was asked if his return to Serie A football was to ‘close a circle’.

He replied: “Yup, and not for revenge. My new career was born in Stoke: I was focused on football. Like with West Ham. Beautiful time in England. At the end of which I asked myself: I am cheap, I am in shape, I did well, but why is no top club calling me? 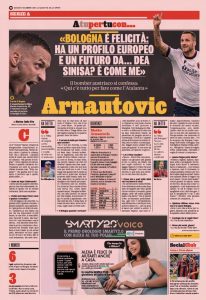 “Know one thing: when someone tells you that he doesn’t do things for money, that’s not true. It’s a lie. But when you are on the field for money, you never think about it. I received proposals from Russia, Turkey, MLS. I talked about it with my family and my brother, the agent. We all said no, together. Then China arrives and I decide to make a new life”.

Leaving West Ham for Shanghai, Arnautovic explains ‘everything was ready’, including a job for his wife and school for the children.

Then Covid-19 struck, and the player decided he wanted to return to Europe, to be with his ‘loved ones’.

There was even a hint he could return to West Ham, but, in the end, it was Bologna and Sinisa Mihajlovic who got their man, where he has scored seven goals in 15 games so far this season.