Turkish newspaper Fanatik claim West Ham United are still in contact with Besiktas over a deal for Cyle Larin.

The Canadian attacker had an impressive season with the Turkish club after his side won the league and cup double, making himself instrumental for Besiktas, scoring 23 goals in 45 appearances in all competitions.

His performances have led to interest from other clubs, including West Ham, and Fanatik report that after their attempts to sign him during the last winter transfer window, the Hammers will try their luck once again.

It’s stated West Ham officials are in ‘constant contact’ with both Besiktas and Larin’s entourage, and that they would like to sign the 26 year old for next season. 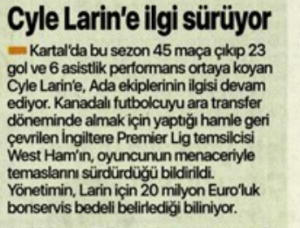 The Istanbul club, down their end, value the player in the region of €20m, and they know West Ham will be looking to bolster their attacking options this summer after selling Sebastian Haller to Ajax in January.

Larin’s contract at Vodafone Park will expire at the end of June 2022 and subsequently they may be forced to sell him in the next transfer window.