Since Yacine Brahimi’s contract with Porto expires at the end of the season, the Portuguese press expects the cup final to be his last game for the club.

A couple of outlets today bring a story saying the player wants to leave Porto with a last trophy, which could be won in the game against Sporting at the weekend.

And it turns out that West Ham United continue to be named as one of the most likely destinations for the 29-year-old.

Correio da Manhã says that Fenerbahce, West Ham and Betis are the three clubs fighting for his signing this summer. 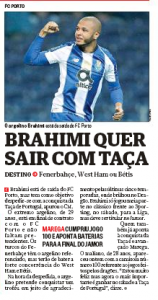 There are no more details on the chase for now. All they do is to highlight Fenerbahce’s interest, since they are the latest club to join the race, but there’s nothing about an advantage for the Turkish side.

Newspaper O Jogo comes up with the same list, but adding Marseille to it. However, their claims come from elsewhere.

They also show that Brahimi is the fifth foreign player with most appearances for Porto, and sound really confident that he’s leaving for free this summer.