West Ham and Crystal Palace have ‘already made an enquiry’ for Marko Arnautovic as he looks set to leave China this summer.

That’s according to Il Resto del Carlino, who name the Premier League duo as competition to Bologna for the Austrian forward.

Arnautovic has been with Shanghai SIPG since 2019 when he left West Ham in a £22.5m deal and has been a relative success in China since with 20 goals and four assists in 38 games for the club.

However, a government crackdown on spending in the Chinese Super League is forcing the clubs to strip back, and that is seeing the big earners like Arnautovic pushed out.

He’s subsequently been linked with a return to Europe, and Il Resto del Carlino say there are offers in the Premier League.

According to their information, West Ham and Crystal Palace have already made enquiries about the striker as they look to bolster their forward options.

It’s felt both of those clubs ‘would represent a threat’ to Bologna’s chances of getting him, particularly West Ham, given Arnautovic’s previous association with the club. 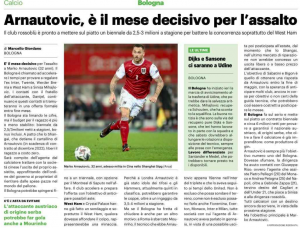 He was ‘an idol’ at the London Stadium during his time there, and they could ‘guarantee the cups’ and a €3.5-4m per year deal were he to return, a much better offer than Bologna’s €2.5-3m.

Whether Crystal Palace would offer as much isn’t mentioned, but it is made clear they would be an equally big threat ‘if they were to sink the blow’.

Whether they will remains to be seen, but it seems Arnautovic will have offers regardless should he leave China as expected.