Home Europe Player ‘one step away’ from finalising West Brom move – Has ‘everything...
SHARE

Celta Vigo midfielder Okay Yokuslu has ‘completely closed’ an agreement with West Bromwich Albion to join them on loan this month.

That’s according to La Voz de Galicia, who say the midfielder is close to finalising a temporary move to the Hawthorns.

Reports throughout the last week have suggested that West Brom are closing in on the Turkish midfielder, with Sam Allardyce keen to add to his squad ahead of Monday’s transfer deadline.

Yesterday we covered reports from Spain that the deal was near completion and La Voz continue on that theme today.

They say the player seems to have everything ‘completely closed’ with West Brom having negotiated the nature of the deal himself.

It’s explained that he has insisted on a loan deal without a purchase option, hoping that he can revalue himself in the Premier League and find a ‘better destination’ in future. 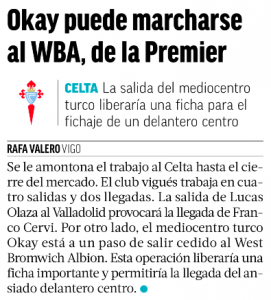 AS back this up somewhat by saying that Yokuslu is ‘very close’ to leaving Celta to join West Brom on loan, although he did train with the Spanish side yesterday afternoon so clearly there is no rush.

Marca, meanwhile, are much more positive on the whole deal and say the midfielder ‘one step away’ from finalising the loan move.

It does seem that Allardyce will be getting his man, then, even if the player doesn’t seem all that keen on the transfer.