Sporting would dearly love to take Islam Slimani back to the club during the January transfer window, but there’s several problems.

Slimani isn’t what Sporting desperately need right now, the club couldn’t pay a big fee for him and certainly wouldn’t get anywhere near his current Leicester City wages.

Then there’s competition from England. Portuguese newspaper A Bola state West Brom, Watford and Stoke City are all interested in the player, and in Portugal it’s believed Leicester would prefer such a solution.

With an assumption any move is likelier to be a loan, it’s thought West Brom, Watford and Stoke would then be likelier to pay a higher price in the summer, and also provide a better platform to market the player to other English clubs. 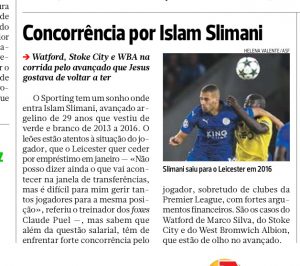 Watford manager Marco Silva is a long time fan, which may see the club as more preferable to Slimani than West Brom or Stoke.

The Algerian striker needs a move away from Leicester, given that when he does play, and manages to impress, he then doesn’t find himself awarded with a better run in the side.

Claude Puel has a wealth of options upfront.