Despite all that initial confidence that Filip Krovinovic would be joining West Brom this summer, things look quite different now.

Only a couple of newspapers talk about the process today. One of them is A Bola, who say the transfer is still being negotiated.

They claim that although agent Antonio Araújo said the move was almost done, there were still a few details to be sorted between the clubs.

It’s reported that despite missing the squad presentation due to the transfer, Krovinovic has now joined his teammates as he waits for things to be finalised. 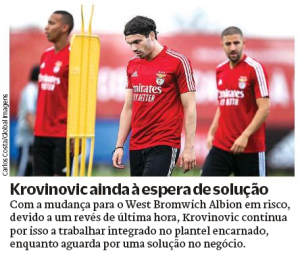 Meanwhile, newspaper O Jogo doesn’t sound so sure about the transfer.

They say the move is now ‘at risk’ due to a ‘last minute setback’. It’s claimed the player has rejoined Benfica’s squad as he ‘waits for a solution’ on the transfer.

Reports from Portugal have been saying West Brom are paying £300k to have Krovinovic for one season, with the amount being doubled in case the Baggies get the promotion to the Premier League.

The loan deal isn’t expected to have a buying option.