It’s been well documented Chadli is a target for Besiktas and the Turkish club now need to hold further talks with West Brom over a loan deal.

According to AMK Spor, Chadli has said ‘yes’ in principle to an agreement and the Belgian international has accepted their offer of €2.2m offer a season.

However, despite getting an agreement with Chadli, AMK Spor report Besiktas have yet to convince West Brom on a deal, and now the Istanbul club need resources to meet the Championship side’s demands.

The Turkish newspaper claim Besiktas are looking to offer a loan fee of €1.5m to West Brom for Chadli but are willing 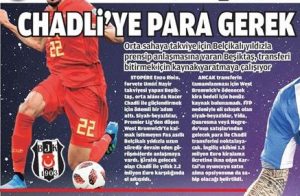 to increase their offer if they sell the likes of Domagoj Vida, Ricardo Quaresma and Alvaro Negredo.

Chadli is contracted to the Baggies until June 2021.