Oliver Burke’s playing time at West Bromwich Albion has been limited since he moved to The Hawthorns from RB Leipzig in 2017.

In the first half of the last season, the winger failed to start for the Baggies in the Championship and was sent out on loan to Celtic in January. He managed four goals and three assists for the Bhoys in the second half of the last campaign.

New manager Slaven Bilić used the 22-year-old a substitute in the first two league matches of this season but left him out of the squad for the next three fixtures.

The Scotland international’s temporary future could be away from West Brom, if the reports are to be believed. 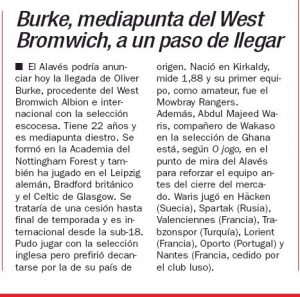 Friday’s edition of AS claims Alaves are interested in the wideman and the report’s headline reads ‘Burke, West Bromwich midfielder, one step away’.

Within the story, it’s further explained Burke’s move to the Spanish club could be announced as early as today.

He is expected to join Alaves on a season-long loan deal.