Wilshere has yet to extend his contract with Arsenal, which is also the case with Ozyakup and Besiktas.

The Turkish newspaper suggest the Frenchman is looking to reunite with Ozyakup, following their brief time together at the Emirates. 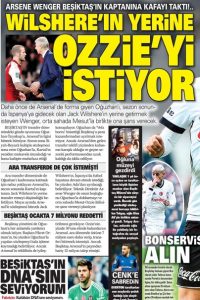 Aksam say the decline in Ozyakup’s recent performances for Besiktas is down to being linked with a return to Arsenal, because it’s believed his head has been turned by the Premier League side.

It’s also claimed Besiktas president Fikret Orman rejected a €7m offer from the Gunners during the January transfer window as he wants the player to extend the player’s contract and then potentially sell for more in the summer.

Aksam say Wenger is looking to partner Ozyakup with Mesut Ozil, and that’s said to be tempting for the player.

Last year it was reported in Turkey that Arsenal are due 30% of any transfer fee Besiktas get for Ozyakup. The Turkish club were said to want to remove the clause, and had offered Arsenal €1m for it, which didn’t seem like a great deal.

The next step for the Turkish media in this story will possibly be presenting Wilshere as a replacement.