There are now 23 days left for Porto’s Ivan Marcano to be able to sign a pre-contract for whatever club he wants to.

The defender has recently been linked to clubs such as Everton, Inter Milan and Valencia, who would all be keeping an eye on his situation to possibly sign him on a free deal in the summer.

Portuguese newspaper Record has a story about the player today, claiming that he’s still deciding his future and doesn’t seem close to renewing his deal with FC Porto. 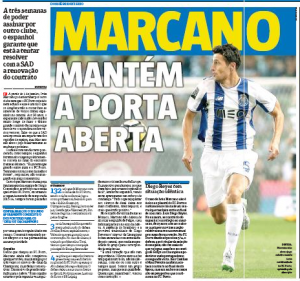 Speaking to the local media after the Champions League game against Monaco, Marcano said: “It’s a subject I keep between me and FC Porto. We will try to solve it the best way.”

But this time, when reporting the clubs who are in the race to sign the player, Record doesn’t add Everton to the list.

They actually forget about Inter Milan too, mentioning only Spanish clubs, who would be Sevilla, Betis and Valencia.

Now it’s hard to tell if Everton were thrown out of the race or if Record and A Bola have different information, since it was the latter who recently reported the Toffees’ interest.

It seems this situation will still drag on for a while, with the player evaluating all the options he has, as confirmed by his agent earlier this month.

With Portugal, Spain, England and Italy to pick, Marcano will have a lot to think about in the final weeks of the year.