Tottenham Hotspur secured the services of Fernando Llorente on a two-year deal and the striker arrived at the club from Swansea City on deadline day of last year’s summer transfer window.

At the north London club, he’s made 31 appearances across all competitions which includes 10 starts in his debut season. This term, he has played less than 30 minutes across two matches in the Premier League and the Carabao Cup.

Earlier in July, the former Juventus man’s father and agent, Chus Lorente, told CalcioNapoli24 that his son will not sign an extension with Mauricio Pochettino’s side as his current contract will expire in 2019.

The World Cup winner with Spain gave an interview to Catalan newspaper Mundo Deportivo and was asked about his future plans beyond the 2018/19 campaign.

Llorente said, “I have not thought of anything yet. I am focused on my job at Tottenham and I don’t want to look beyond. Try to get more minutes and out-do myself each day.

“Returning to Athletic [Bilbao]? It is one of the options. For my family’s sake, I would like to continue in Europe, but we’ll see what deals there are when the season ends. Continue in the Premier league or go back to Spain or even Italy, where I was very happy.” 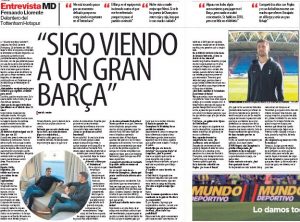 At Spurs, Harry Kane is preferred ahead of the 33-year-old as the club’s first choice striker, meaning only a move away from the club will help Llorente improve his chances of playing regular football.