Manchester United sold Romelu Lukaku to Inter Milan in 2019 for a reported fee of €80m, two years after they took him from Everton.

The agreement reached between the Red Devils and the Serie A side for the striker’s transfer could now cause issues for the Nerazzurri.

Corriere dello Sport state United included a clause in the contract and as per the deal, if Antonio Conte’s side fail to meet any of the deadlines set for payments, then Inter ‘immediately become a debtor of United’ for the full remaining amount.

It’s claimed a deadline has been skipped for a payment related to bonuses.

The Italian side are facing financial issues, due to which they would have not made the payment to the Old Trafford club in due time. Therefore, the clause agreed between the two sides has now been triggered, and according to the report, a ‘debt of €50m’ was created’ from Inter towards Manchester United.

CdS states: ‘And the most immediate reflection for that debt concerns the UEFA licenses. The European body, in fact, only issues them to clubs that are up to date with payments as of March 31st. Otherwise, no license and no participation in continental competitions, with everything that follows with it.’

Inter have already delayed making part of the payment to Real Madrid in regards to Achraf Hakimi’s deal and have been given an extension until the end of this month to pay.

Manchester United, for their part, have ‘begun to exercise a certain pressure’ and have proposed various solutions, which includes allowing Inter sending Milan Škriniar or Lautaro Martínez to the English club.

Both would please Ole Gunnar Solskjaer.

The duo have a higher valuation than the money United are still to receive from the Lukaku operation. The Premier League side ‘wouldn’t back down’ and are willing to pay an additional fee to take one of Škriniar or Martínez to ‘settle the situation’.

‘Can’t you pay for Lukaku? Give us one of Lautaro and Skriniar and we’ll fix everything’ – this, according to CdS, is the summary of communication that took place between United and Inter in ‘recent days’, and the start of the ‘shocking’ deal being proposed. 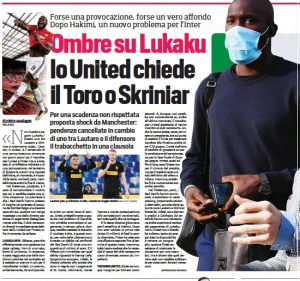 Was it an ‘actual request’ or a ‘provocation’ is still not known, and at the moment, it’s ‘impossible’ to give a ‘definitive answer’. There should be more clarity by the end of this month.