Raphaël Varane’s future seems to be away from Real Madrid, and Manchester United are regularly linked with the player.

His contract runs down in 2022 and the La Liga side want to avoid the defender leaving as a free agent at the end of next season.

Over the weekend, reports from England explained the Red Devils would offer €46m for the centre-back.

With the Old Trafford side reportedly set to have an offer ready, AS explained Los Blancos want close to €70m to sanction the France international’s sale in the summer.

On Saturday, Zinedine Zidane’s men take on Villarreal in the last tie of this season. Marca state this could be ‘the week of goodbye’ for some players, with Varane included in the list.

The newspaper explains the 28-year-old could have been the future captain of the club, but he’s ‘not clear about his future’, which is why he has refused to extend his contract.

The former Lens man has so far refused to sign a new deal because he feels undervalued at Real Madrid and could leave the club in the upcoming window.

The situation has made Real Madrid rethink and to make him available in the market, so 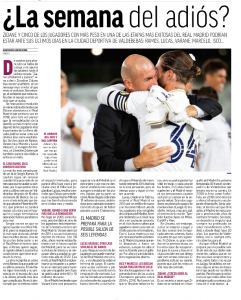 Marca add Madrid are of the belief he has a ‘superior proposal’ from abroad [from an unnamed club], which is why they don’t rule out his sale, even though it wasn’t their initial plan.

Therefore, a transfer is very much on the agenda.

With Manchester United still in the picture for Varane’s signing and Real Madrid willing to cash in from his sale in the summer, a deal is there to be concluded.