Watford’s pursuit for Sporting winger Jovane Cabral is today back on being mentioned by the Portuguese media.

This time it’s Record who talks about the chase, as they explain all the transfer business that the Lions have been recently taking care of.

Speaking of sales, the newspaper says there are a few clubs who’ve been speaking to Sporting regarding Jovane. These are Watford and others from Serie A.

It’s said the winger should leave Alvalade for something close to €20m, and the Lions want to make the sale so they have the budget to complete the signings on their list. 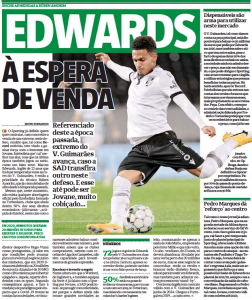 Watford’s interest in Jovane was first reported by the English media a week ago, and it didn’t take long until the Portuguese press started having their own claims about it.

Although Record says his price is nearly €20m, a couple of other local outlets still claim Sporting will demand €15m for the move.

The winger had five goals and four assists in Sporting’s title winning campaign.