Suffering a ruptured cruciate ligament in the second half of last season against Liverpool, Gerard Deulofeu was unable to help Watford stay up in the Premier League.

There’s no telling whether or not that outcome would have changed had he managed to finish the campaign, but one thing was certain when the Hornets went back down to the Championship: the Spaniard wasn’t going to stay.

Had he not been injured, there might have been a chance for him to secure a permanent move elsewhere, but that wasn’t to be, so the Pozzo family, in normal fashion, got creative and sent him on loan to their other club, Udinese.

The aim, it seems, is to try and get him back up to speed by getting him minutes in a top league, but it has yet to pay off.

Starting just once in Serie A, Deulofeu didn’t even come on off the bench in their latest game, a 3-1 away win against Lazio.

There’s some worry coming out of the Udine press, with Messaggero Veneto explaining the situation.

They state ‘the family transfer was endorsed by Gino Pozzo in a different perspective than those of Pussetto and Roberto Pereyra’. 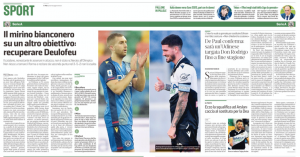 Basically, for Watford, ‘Deulofeu must calmly return to the player who in the spring of 2019 really enchanted English football in the semi final of the FA Cup’.

While that’s all well and good, Messaggero Veneto do add: ‘Calmly, but not many would have imagined that after two months in Udine, he has improved so little in terms of pace, background or his game in general’.

Take the game in the Coppa Italia against Fiorentina, which the newspaper describe as ‘offering everyone a ghost Deulofeu: no noteworthy play, no one on one dribbling’.

It’s a little worrying, but knee injuries are notoriously difficult to come back from, especially when pace and explosiveness is key to your role.

Owning both clubs does allow the Pozzos to carefully monitor their prized asset, but they will be hoping to see some improvement throughout January and the second half of the season.