Moussa Sissoko is expected to leave Watford and complete a move to Nantes, according to multiple claims from France.

Thursday’s edition of Ouest France explains the midfielder is set to join the Ligue 1 side on a two-year deal.

His current deal runs until 2023 and the French club will pay €2m plus bonuses to the Hornets to secure the former Newcastle United man’s services.

Over at Foot Mercato, they have a report on the 32-year-old, titled: ‘Moussa Sissoko will come to strengthen FC Nantes!’.

The website echoes claims made by Ouest France and states the Watford player will sign a two-year contract at Nantes.

RMC Sport had reported the France international was close to joining Nantes. Foot Mercato further add it is ‘much more than that’ because Sissoko has ‘already passed his medical’ tests with his new club.

He is now set to sign his contract at 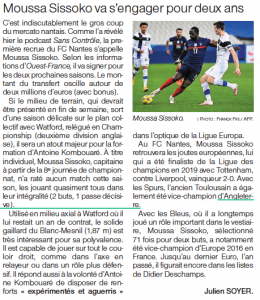 Nantes on Thursday and his ‘arrival could take place very quickly’.

After spending five seasons at Tottenham Hotspur, the player joined Watford last summer. He made 36 starts in the league for Watford in the 2021/22 campaign, in which they were relegated from the Premier League.

Sissoko is now close to returning to France after spending nine years in England with Newcastle, Tottenham and Watford.

‘Not over’ – Player’s entourage try to lower price to seal...