L’Equipe has an article this weekend looking at some of the lesser known young talents in French football.

Haissem Hassan is one of those chosen, and he’s even rarely known when compared to the other lesser known talents.

Despite that, it’s no great surprise that Watford have already got their eyes on the Châteauroux owned youngster. The Premier League club make it their business to find out about prospects before others and try to get deals done before the price goes through the roof.

They’ve tried that with Hassan, and L’Equipe report the Hornets have ‘made an offer’ for the attacking midfielder. There’s no further explanation, other than it being made clear Watford’s efforts have so far been in vain. 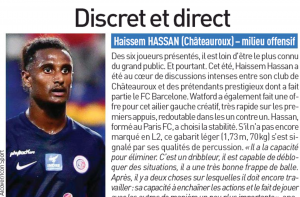 Barcelona are also interested and, along with the English club, have been in talks over a potential transfer. It’s unlikely Châteauroux will hold him for long, so it’s worth Watford hanging around to see if their look changes.