Julen Lopetegui is a fan of Gerard Deulofeu. That’s never been a secret.

With a wealth of attacking talent at his disposal, the Spain manager believed enough in the now Watford forward to include him in his squad for some friendlies last year, and it paid off.

The 23-year-old came off the bench against France to score a goal and assist another in 23 minutes following some good performances for AC Milan.

However, as soon as he returned to Barcelona, where he struggled to get game time, Deulofeu disappeared from Lopetegui’s lists, and a move to Watford was sorted out by the player in a bid to change that. 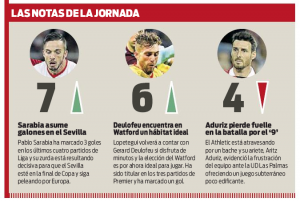 Three appearances into his Vicarage Road spell, and the forward is once again catching his national team manager’s eye, as reported by Sport, who now expect him to be on the plane to Russia if this form continues.

The Catalan newspaper explain Deulofeu has found himself an ‘ideal habitat’ at Watford, where he will get minutes under Javi Gracia, who clearly believes in him.

Good news for all involved, then.