Barcelona defender Jean-Clair Todibo will play his last match for Schalke later today and with that, his loan stay will come to an end. The La Liga winners’ plan is to offload him in the upcoming window.

Earlier this week, reports from the Catalan media discussed interest from Watford and Southampton.

Once he finishes this campaign at Schalke, the Frenchman will ‘spend the next few days analysing pros and cons’ of each offer he has received so far.

Nigel Pearson’s side and the Saints are mentioned as the newspaper once again backs the interest from these two sides in the player.

With Barca set to sell Arthur to Juventus in the coming days, they are not in a desperate need to raise funds to balance the books. 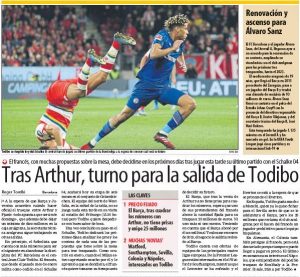 Therefore, they’re demanding €25m for the ex-Toulouse man and are not ready to provide any discount for his sale.

Watford and Southampton will face competition as the report claims clubs in Spain (Sevilla), Germany (FC Köln) and Germany are also interested in Todibo.

Napoli could also make an attempt to sign him, if they sell Kalidou Koulibaly this summer.