Napoli have been observing certain players for some time and Sassuolo’s Jérémie Boga is included on their list.

This is according to Gazzetta dello Sport, who state that it won’t be easy for Gennaro Gattuso’s side to sign the winger because ‘watch out for Chelsea’.

Boga came up through the ranks of the west London club’s academy, but failed to create a mark for himself at Stamford Bridge. Therefore, the Blues allowed him to join the Serie A side in 2018 and they included a buyback option, which is set at €15m.

Frank Lampard’s side can exercise the option to bring the Ivory Coast international back to the Premier League. If they do it, then the Europa League winners could ruin the Naples club’s plans to land the player. 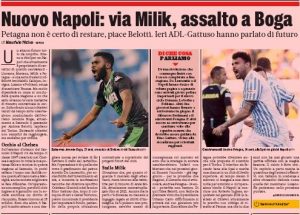 Although Chelsea have a buyback option, the Italian newspaper doesn’t make it clear whether or not they will sign Boga in the summer.

Boga has seven goals and two assists to his name in 23 league matches for Sassuolo.