Home Premier League Arsenal ‘Beware of Arsenal’ – Gunners ready to ‘return to the charge’ for...
SHARE

Switching their focus to Arthur, Arsenal decided to put the idea of signing Dejan Kulusevski to one side.

However, the walls placed around the Brazilian midfielder by Juventus have made it difficult for the Gunners to get the deal they want done, meaning they might have to look elsewhere to strengthen Mikel Arteta’s squad.

Kulusevski could be that man, as he isn’t a central midfielder, which is the area of the pitch the Serie A side are trying to not weaken, meaning he might be more expendable than his teammate.

Tuttosport on Friday explain that while Everton came forward with a loan offer, which didn’t really enthuse the Swede, they warn ‘beware of Arsenal’, described as a club who ‘came forward in recent times’.

Now, the Gunners are ‘ready to return to the charge’, and ‘always on loan’, because it seems the Emirates side are currently penny pinching, having spent a large sum of money in the summer. 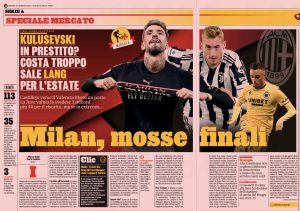 We’ll have to wait and see what comes of this, but a temporary deal seems the best bet, ‘unless an agreement is reached on a different formula in extremis’, meaning at the last minute.

Gazzetta dello Sport also have a bit on Arsenal’s desire to sign Kulusevski, explaining that while there might have been some hope of a Milan move for him, that was too expensive for the Italians, meaning the Gunners solution is ‘more likely’ than that of Tottenham, who have ‘other things on their mind’.

Thus, a move for him is now ‘only abroad’, giving hope to Mikel Arteta that he can at least get someone in.