Italian newspaper Tuttosport have a segment called ‘Dear champion I write” where kids send questions to Serie A players.

Even Cristiano Ronaldo has had a go at answering, adding his name to other players throughout Italian football. AC Milan forward Krzysztof Piątek was the latest, and one of the questions took him back to his childhood.

This gave the 24 year old a chance to tell everyone he’s an Arsenal fan.

“As a child I was an Arsenal fan, I really liked Wenger’s team playing style and admired champions like Thierry Henry and Dennis Bergkamp,” he said.

Milan signed Piątek from Genoa at the start of this year and the latter took him Polish club KS Cracovia in 2018, with whom he had spent two seasons. 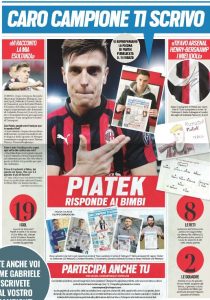 Clearly, he has learnt a trick or two by watching the former Arsenal star duo of Henry and Bergkamp, players described as his idols.

Perhaps this is one for Arsenal to keep an eye on.