Home Europe ‘The wall rises’ – Club putting up barricades after ‘dry no’ to...
SHARE

On Thursday, a story came out that Manchester United were interested in Dejan Kulusevski.

The story came from Calciomercato and their journalist Daniele Longo, who made it clear that the Red Devils had made the first move to try and sign the Juventus forward.

It wasn’t successful, if we’re going to be honest with you, but it was made clear that Ole Gunnar Solskjaer, who really likes the idea of managing the Swede, would make another attempt in the relatively near future.

That’s because despite a vast revamp of Andrea Pirlo’s squad set to take place in the summer, there are a few pieces that aren’t going anywhere. 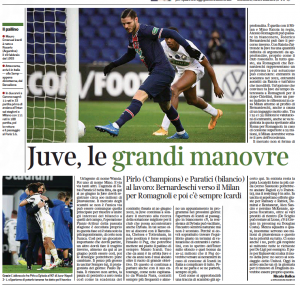 Matthijs De Ligt is one of them, and so is Kulusevski.

The newspaper state that ‘the wall rises’ around the 20-year-old, who only joined in the summer after his time at Parma, while Manchester United’s enquiry is also mentioned, with it explained it was met with a ‘dry no’.

We’ll have to see if that wall can be grappled over, but it might be best, for now at least, if Solskjaer and his merry Old Trafford men looked elsewhere.