Twice, the French press have said that Georges-Kévin N’Koudou to Tottenham was all but done with a signing imminent, and twice this hasn’t happened.

We’re not saying their reports weren’t reliable, because we believe them, but there’s something holding up the deal, and that’s Clinton N’Jié.

As explained by L’Equipe on Wednesday, the deal, which has been over a month in the making, was all set to be done on the 20th of July, but negotiations had to start over, and last Friday’s agreement should have been the final step. 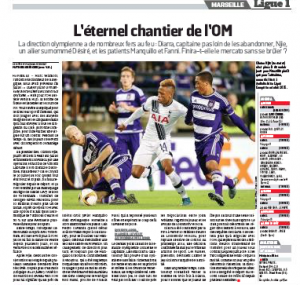 The problem is that in between that month when everything started from scratch, Clinton N’Jié has kind of changed his mind about moving to Marseille.

Keen at first, the player has since started training with Tottenham in Enfield again, and isn’t too thrilled about a return to Ligue 1.

Marseille’s new director of sport, Jacob Gunter, has been trying to seduce the youngster over the past few days to try and get him to change his mind, but it’s going to be a ‘wait and see’ game before we find out if he’s managed it or not.

It’s alright, we’re getting used to waiting for this one.