Everyone wants a bit of Leeds United at the moment.

Therefore, with Fabio Capello doing a column for Gazzetta dello Sport, it’s no surprise the former England manager gave them a mention.

Capello is covering English football for the grand old Italian newspaper, and whilst that wouldn’t normally include what’s going on in the Championship, Marcelo Bielsa being at Leeds United makes them a special case.

Leeds are currently second to Middlesbrough in England’s second tier, but Bielsa’s men have a game in hand on their promotion rivals. Seven goals in two matches so far is a brilliant start and the demolition of Derby County has made people take notice.

Capello, now 72 years of age, didn’t want to hold back his excitement at seeing how things go at Elland Road this season under El Loco. 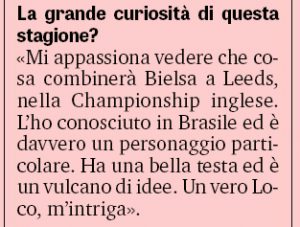 Asked to speak about a ‘great curiosity of the season’, Capello explained: “I am passionate to see what Bielsa will do at Leeds, in the English Championship. I met him in Brazil and he’s really a special character. He has a beautiful brain and is a volcano of ideas. A real Loco, he intrigues me.”

A ‘volcano of ideas’ seems like a great way of putting it.