Eden Hazard has struggled with multiple injuries in the last two seasons and has made just 43 appearances for Real Madrid since joining them from Chelsea in 2019.

The forward’s currently recovering from a hamstring injury and while the 30-year-old works on regaining full fitness, his ‘name has been ringing around London’ in the last few hours.

That’s according to AS, who add Chelsea ‘received the proposal’ of intermediaries, offering the Belgium international to return to Stamford Bridge.

It’s a ‘very difficult possibility’ for the Blues to sign the former Lille man due to economic reasons and Chelsea having his position already covered in the squad. In addition to this, Roman Abramovich is focused on spending big on a new striker.

Real Madrid agreed a €100m deal with the west London club, where they will have to pay €20m over a period of five years. In order to avoid making a loss, the La Liga side would have to sell Hazard for €60m.

This figure is considered ‘very high’ by the Champions League winners, and they must also take into account of the player’s salary, if they were to sign their former star this summer. 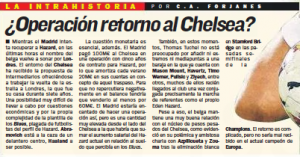 Thomas Tuchel, for his part, doesn’t favour adding a winger or an attacking midfielder to the existing squad.

Even though intermediaries have offered Hazard to Chelsea, his return to the Premier League side looks difficult for economic and sporting reasons.