Home Premier League Arsenal Vermaelen has shock offer on the table to return to Arsenal, another...
SHARE 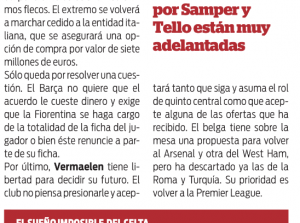 Thomas Vermaelen annoyed the Catalan media last week, because he made them look a little silly. The Belgian defender had turned up at Barcelona’s training complex several days before his holiday was due to end.

That was seen as him returning to work early, just like Leo Messi had, and of course something which should be praised. When it became clear that Vermaelen had only been there to say hello to a few people, and quickly left to resume his holiday, there was a little irritation.

In all honesty, the Catalan media haven’t been too impressed with Vermaelen since he arrived. It was thought he cost too much money, another Arsenal overspend, and would only serve to block the route of younger players… when he was fit.

Catalan newspaper Sport say in their Tuesday edition that Barcelona are relaxed over Vermaelen’s future, he can either stay and be fifth choice, or he can take one of the offers he’s had. Sport say one of the offers Vermaelen has on the table is an Arsenal return, and another is from West Ham.

Sport don’t seem to be making a big enough song and dance about the Arsenal offer, perhaps they really don’t care, but that would be out of character. Vermaelen would provide a flexible option for Arsene Wenger, as long as he was able to stay flexible enough to not get injured.