Following reports from the English media this week claiming Manchester United are interested in signing SC Braga defender David Carmo and have him as an alternative to Ajax’s Jurrien Timber, we now get to see several stories in the Portuguese media about it.

There are no local outlets coming out with a big exclusive about the purchase, but still, interesting bits from each report can give us a better picture of this scenario.

Starting with A Bola, the newspaper covers Manchester United interest as the Premier League track being ‘reactivated’ for him, as other English clubs had already chased him in the past.

It’s said Carmo’s move ‘seems inevitable’ this summer, following the season he’s just had with Braga. And regarding his €40m release clause, the newspaper doesn’t sound so sure that much will be needed for Braga to accept his sale. 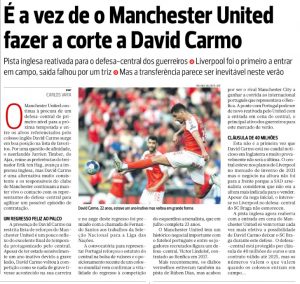 Record, meanwhile, claim to have learned that no offers have arrived for Carmo yet. Also speaking of the price, they claim that even in case the club accept to let him go for less than the release clause, that won’t be for much less than the price tag.

And Jornal de Notícias claims that Braga’s intention is, at least initially, to keep the player. But the market will tell whether they’ll be able to hold the defender or not.