Marseille will push to get a deal done for Arsenal midfielder Matteo Guendouzi once they have tied up their move for Brazilian Gerson.

That’s according to L’Equipe, who say Gerson’s arrival will ‘not compromise’ the arrival of Guendouzi at the club.

The newspaper explains that Guendouzi is ‘unlikely’ to return to Arsenal this summer following his loan at Hertha Berlin this season.

He had a difficult season in Germany but is still ‘highly rated’ on the market, and he ‘fits in well’ with Jorge Sampaoli’s plans for his midfield.

Guendouzi has already been to Marseille at the end of May, where he met with their president and Sampaoli to discuss a move.

The Arsenal man has ‘given his priority’ to the French club, and the ‘contours of a future contract’ have already been decided. 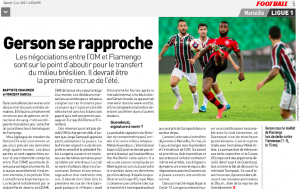 Marseille have already begun negotiations with Arsenal over a transfer, and they intend to find a ‘reasonable financial agreement’ with them to make a move happen.

Guendouzi is said to be ‘no longer welcome’ at the Emirates as there is a ‘total rupture’ with Mikel Arteta.

The prospect of a return to the limelight with Marseille is a decisive argument for the French side, and if the deal goes through, he could be introduced to his new teammates on June 28th when pre-season starts.