Inter Milan are already lining up exciting transfer plans ahead of the January transfer window, as happens before every window. The plans, if history follows itself, will be really impressive and excite supporters, only to then largely fall flat on their face when hitting reality.

Aside from bringing big-ish names back from China, no doubt inspired by Paulinho to Barcelona, Inter are looking at a defensive acquisition, and whilst the plans still sound quite optimistic, it’s sad as well.

Tuttosport say Inter will be looking at ‘The unhappy and little used of Europe’. Basically, players they feel will agree to join Inter and who could be gettable.

Manchester City’s Eliaquim Mangala is said to fall into that bracket, along with others 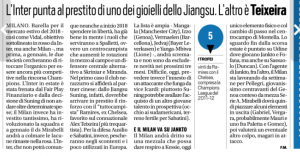 Mangala had a good season on loan at Valencia, and he really shouldn’t be in the situation in which he finds himself.

The problem, as ever, will be money, but unless things change dramatically for Mangala at Manchester City, a January exit seems the kindest solution.