After something of a slow summer, Arsenal have woken up and have been getting serious business done.

The Gunners completed the signing of Nicolas Pepe yesterday, and it seems they are now pushing to get a deal done for Juventus midfielder Sami Khedira, at least according to claims from Turin today.

Tuttosport report that Unai Emery will not give up on signing the German and wants him at the Emirates next season as he believes he will add experience to his midfield.

However, Tuttosport say ‘everything revolves’ around the contract he currently has in Turin, with the midfielder having signed an extension until 2021 back in 2018. That deal, which reports earlier in the window stated is a big one, is holding any move up.

They explain the situation can be unblocked if Khedira agrees to terminate his contract with the club, which could happen if Juventus offer a decent severance package as compensation. 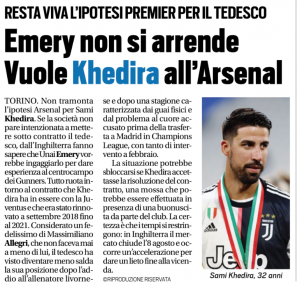 That is yet to happen, but things will have to be done quickly if any move is to take place, with the Premier League transfer deadline just six days away.

Even if he ends up a free agent, he will have to have been one by the close of the window for Arsenal to be able to sign him that way.