Txiki Begiristain and Pep Guardiola have what Mundo Deportivo have, on their Saturday back page, described as a problem. Not only are Manchester City looking for a goalkeeper in the summer transfer window, they actually want two.

That wouldn’t be a great surprise, especially if Claudio Bravo was to make a quick escape from the Premier League club. With Willy Caballero’s contract running out at the end of next month, the Argentine goalkeeper’s future is obviously in some doubt.

Guardiola may be stubborn and keep faith with Bravo, but there’s the possibility fo a complete change. Mundo deportivo back up reports of serious interest in Victor Valdes, and they say Manchester City’s interest in signing the Middlesbrough goalkeeper is ‘real’.

With experience of playing the modern Barcelona way, in fact with more experience of such than any other goalkeeper, Valdes would find Guardiola’s orders to be second 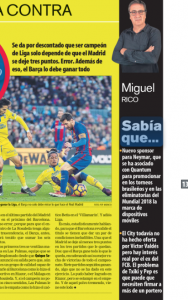 nature. Already being sued to the Manchester area, Valdes may also have extra motivation to prove Manchester United wrong.

The Spaniard wouldn’t be the level Manchester City fans are hoping for, but he’s been there before and at 35 years of age he has plenty of time left. If two goalkeepers are borught in by Guardiola, Valdes being one wouldn’t be a huge shock.