With another summer market coming to an end, it’s time for the Italian press to start speculating the next big moves in Europe, and it all starts with the possible free agents, of course.

Newspaper Gazzetta Dello Sport features a story today naming several players whose contracts expire at the end of the 2019/20 season, and two of them come from Tottenham Hotspur.

The first one, of course, is Christian Eriksen. After being on the edge of leaving Spurs this summer, his situation gets even more attention since he could move for free at the end of the season.

Gazzetta writes that Manchester United and Real Madrid are the main contenders to sign him, but Inter Milan and Juventus would also be interested, even though the competition is ‘scary’. It’s claimed that he’s had offers of a €10m salary per season. 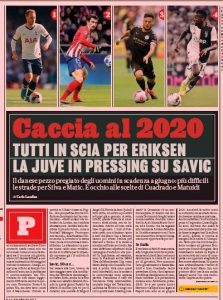 Christian Eriksen is compared to Eden Hazard, since the former Chelsea player was the man to leave the Premier League this year, and now it should be the Dane’s time.

The other one is Toby Alderweireld. Gazzetta Dello Sport claims that Roma have been interested in signing the Belgian defender, and wonders if the ‘feeling’ will continue in the next summer.