Earlier in June, we relayed news from Belgium that Marouane Fellaini was attracting interest from Arsenal, while Besiktas and an unknown Chinese club made concrete offers to secure his services.

The midfielder’s earlier contract at Manchester United was set to expire on June 30th and clubs were keen on signing him on a free transfer.

However, the former Everton man ended the speculation surrounding his future and committed his future to the Red Devils by signing a two year deal, with an option to further extend it by a year.

Jose Mourinho’s favourite was in the middle of the 2018 World Cup with Belgium when he committed his future to the Premier League outfit.

Belgian newspaper Het Nieuwsblad has an explanation as to why the player rejected the opportunity to earn a ‘lot of money’ elsewhere and decided to continue with the 20-time English champions. 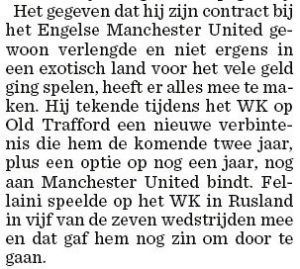 It’s claimed the 30-year-old’s decision to sign an new contract at United has ‘everything to do’ with his desire to continue playing for his country, having made his debut for Belgium in 2007.

Staying at Manchester United was thought to be the best way to achieve that goal.