On June 24th, AS explained that Manchester City are the latest club to join the race to sign Umar Sadiq.

These claims are relayed in today’s edition of the same newspaper, and AS add ‘sources close to the club confirm the Citizens’ interest’ in the UD Almería star.

Pep Guardiola’s side have joined the fight for the 24-year-old and their plan is to sign him and send him out on loan to French club ES Troyes AC, who are also owned by the City Football Group.

If the Nigeria international impresses for Troyes, then AS say City plan to have him for the 2022/23 season.

Sadiq managed 28 goals and nine assists across all competitions for the second division Spanish side and they are demanding €30m to let their goalscorer leave this summer.

Over at Mundo Deportivo, they also report Manchester City’s interest in the Segunda División attacker.

The Catalan newspaper, like AS, state the Etihad club’s plan is to sign Sadiq and loan him to Troyes.

His release clause is set at €60m, but the player’s club are ready to let him leave for €30m. 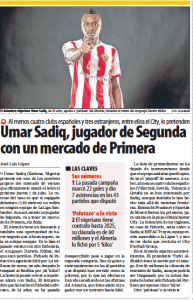 Mundo state Almería have a diamond and an ‘opportunity to do business that, surely, they will not miss’.

With several clubs wanting to sign Sadiq, it remains to be seen who will be successful in securing his signature.