Home Europe Two sources back up Everton interest in manager, and club work to...
SHARE

Two Portuguese newspapers have stories on the future of the Porto manager Sérgio Conceição today. And they’re basically saying the same thing.

A Bola and Record both claim that the Dragons have already kicked off with plans to convince the boss to stay, after the great league campaign he’s had.

The first outlet writes that when Conceição arrived from Nantes, he had to take a 50% pay cut. Now he earns four times less than Rui Vitória, of Benfica, and seven times less than Sporting’s Jorge Jesus.

That’s why a new contract is on the cards, also to protect the manager from interest from the likes of Everton, Inter Milan, Shakhtar and Lazio. 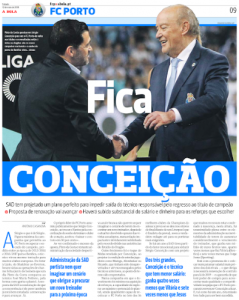 Meanwhile, Record writes that it’s the manager’s wish to stay at Porto, as long as the club work on signing reinforcements so they can keep up with the other big Portuguese sides.

They also mention the interest from Everton, this time saying that PSG and Lazio are other sides interested in him.

None of the newspapers explains what could take Conceição away from Porto, and they don’t even say what his dream destination would be. So they’re really only showing the Dragons’ side of the story.