Newcastle United are interested in Hellas Verona striker Giovanni Simeone after his impressive performances in Serie A this season.

That’s according to Gazzetta Dello Sport and Corriere di Verona, who both say Newcastle are one of several clubs chasing the Argentine striker.

Simeone has enjoyed an impressive campaign for Verona this season, with 17 goals and six assists for a side that finished ninth in the table.

It’s the kind of record that hasn’t gone unnoticed around Europe, and Newcastle are reportedly among those keen. 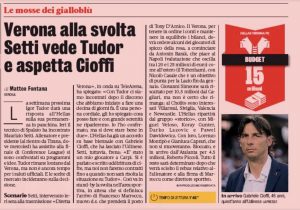 Gazzetta and Corriere both explain that Verona will make Simeone’s move from Cagliari a permanent one for €10.5m but whether he stays there long term is up for debate.

According to the former, Villarreal, Sevilla, Valencia and Newcastle are ‘interested’ in ‘Cholito’, a nickname given to him thanks to his famous father.

The latter backs this up, adding Sevilla and Betis to the mix from Spain before also claiming interest from the Magpies.

They add that his future in Verona ‘hangs in the balance’, although there is no mention of what price the Italian side would be looking to bring in for the striker.

It would obviously be above the €10.5m they have to pay to make his loan deal permanent, and with numbers such as those, considerably higher to boot.

That will be determined in due course, but for now, there is interest from Newcastle and a host of other clubs as well.