Chelsea continue to be named as Ousmane Dembélé’s suitor as there’s still no clarity where he will play next season.

The winger’s contract at Barcelona expires on June 30th and he’s so far refused to accept their latest renewal offer.

Xavi Hernández’s side are finding it difficult to register new players due to their financial issues. They are finding ways to make this happen and tying down the 25-year-old to a new deal can help them in this regard.

That’s according to Sport, who explain the France international’s continuity at the Camp Nou is complicated. Barcelona are ‘still very far’ from what other clubs could offer, and therefore, there hasn’t been any change in the player’s stance.

An improved deal from Barca is unlikely to arrive, while the ex-Borussia Dortmund man is holding positive talks with other clubs, like Chelsea and Paris Saint-Germain. These two sides are interested in him.

Thomas Tuchel managed Dembélé at BVB and the German coach ‘wants’ to coach him again at the west London club.

After returning from vacation, the attacker will analyse 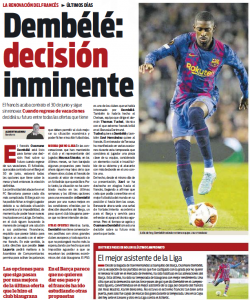 the offers he has on the table and then decide where he wants to play next season.

Time is running out for the Frenchman and he will have to make a decision sooner rather than later. There will be an ‘imminent decision’ as Sport state Dembélé is about to announce his future.

Chelsea are interested because Tuchel wants him. It remains to be seen whether the Blues can take the wideman on a free transfer this summer.