Romelu Lukaku has been in fine form for Inter Milan this season, scoring 27 goals and registering eight assists in all competitions, and has been instrumental in helping his side sit top of the league table

Rumours from England state Chelsea are interested in bringing the striker back to the club.

The Belgium international is on the verge of winning the Scudetto with Antonio Conte’s side. He will turn 28 years of age next month and will be 31 when his current deal at the San Siro expires.

Het Belang van Limburg suggest the former Everton man ‘could leave’ the Serie A side after winning the title, rather than waiting until he turns 31. If he leaves Inter at 31, he could be ‘too old’ to cash in on a last big contract.

The newspaper discuss claims made in England about Chelsea, and then give their view on this case.

Lukaku left Anderlecht for the west London club in 2011, but he wasn’t given enough opportunities to showcase his talent, which is why the attacker was sent out on loan to West Bromwich Albion and Everton before being sold.

It’s claimed Thomas Tuchel, who is looking for a goalscoring striker in the upcoming 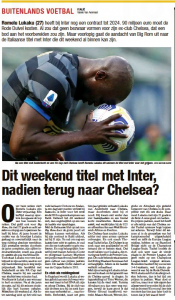 window, is a ‘fan’ of Inter’s No.9. Therefore, Chelsea have him on top of their wish list, along with Borussia Dortmund’s Erling Haaland.

The newspaper suggests the supporters of the English club ‘would welcome Lukaku again with open arms’, since he would be an upgrade when compared with the current options available at Stamford Bridge.