Jurgen Klopp’s comments on Ousmane Dembele have done much to continue the transfer rumour, and have certainly caught the imagination in Spain.

Dembele hasn’t had the impact at Barcelona that was hoped for. Replacing Neymar was a difficult task but even with allowances and managed expectations, the Frenchman hasn’t impressed.

With Antoine Griezmann moving to the Camp Nou back in the news (with everything that was claimed some months ago being claimed once again) it brings up the question of what happens with Dembele.

Mundo Deportivo think Klopp’s comments about being interested in Dembele are ‘very sincere’, but they do say the Liverpool manager sees him as a player who would replace Mohamed Salah.

Christian Pulisic also gets a mention, probably because he’s been linked sporadically to Barcelona himself, and it’s stated ‘it’s true’ that Klopp is ‘trying to sign’ the Borussia Dortmund player. 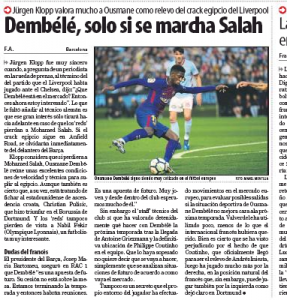 That would also be a big signing, and Mundo Deportivo see him and Nabil Fekir as possible summer Dembele alternatives at Liverpool.

For the Barcelona player, it’s said to be no secret that those who advise him will consider an exit if the sporting chances don’t get better.

An improvement is difficult should the Griezmann transfer go through, unless there’s any injuries.