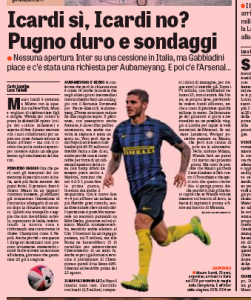 The Italian media are still taking possible Arsenal interest in Mauro Icardi seriously. The Inter Milan striker has, through his wife and agent Wanda Nara, been kicking up an almighty stink this summer, clumsily trying to get himself a huge pay rise.

Inter Milan are growing tired of the situation, and that would surely make a sale more possible if a reasonable bid was made. In their Tuesday edition, Italian newspaper Gazzetta dello Sport say that a possible trip to London is on the cards, to understand the ‘true intentions’ of Arsenal.

That is said to depend on the Alexandre Lacazette situation, and it would be the player’s entourage, presumably Wanda Nara and maybe other advisors, flying over to London for a chat.

Gazzetta dello Sport say that if Nara and Icardi continue to play hardball with Inter, then the club will take the captaincy away from him and give it to Miranda.

Perhaps that should have happened already, and he probably shouldn’t have got it in the first place. Given the circus which surrounds the player, and has done for some time, it’s just doesn’t seem very Arsene Wenger friendly.