Simon Mignolet has had a good week in football.

That’s not a sentence which can be typed so often these days.

The Liverpool goalkeeper is having a tough time at his club and would have preferred a transfer during the summer window. When Loris Karius came in and was made first choice, Mignolet looked to the door, so when the German was allowed to leave on loan, and the Belgian prevented from going anywhere, there was understandably frustration.

Mignolet spoke out publicly, albeit in a mild way, but Jurgen Klopp was irritated and publicly censored his second choice goalkeeper. Maybe Klopp knows there’s some justification in what Mignolet feels and would rather it was kept under the carpet.

Playing only his firth game in 2018 this week, the 30 year old was one of Belgium’s best performers in the draw against an in-form Netherlands team.

Following the match there’s been several articles in Belgium, either expressing surprise the footballer manages to stay at a good level, or explaining he needs to leave Anfield as soon as possible.

Het Belang van Limburg have been speaking to former stoppers, and asked them about Mignolet’s situation.

Jacky Mathijssen is quoted as saying: “Match rhythm does exist for a goalkeeper, but it’s not as important as for a field player.

“A goalkeeper only needs a good focus to perform: he has to decide and to do. You have to have top qualities to keep on trusting yourself. And that’s what Simon undeniably has.” 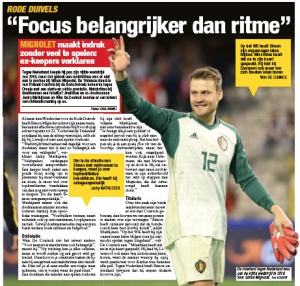 Wim De Coninck added: “He should have been more vocal at Liverpool, because the way he was pushed aside for Karius was below all standards. Simon has proved once again against the Netherlands that he ought to be a starter.”

With Alisson the undisputed first choice at Liverpool, Mignolet will once again have to try and leave the club over the next couple of windows.